Yareelo is a constellation from 2 nanosatellites “Yarilo” №1 and №2 for research of the Sun and solar-earth coupling.  As a part of the mission, we plan to create a formation flight using two-bladed rotary solar sail technology and work out the algorithm for maintaining the constellation. The nanosatellite design, manufacturing, testing, payload integration was done by BMSTU students and professors. [/caption]

The payload onboard the first designed nanosatellites is the X-ray photometer for registration of emission of the whole Sun in the range 0.5-15 keV developed in P.N. Lebedev Physical Institute of Russian Academy of Science (LPI RAS). This highly sensitive instrument allows the observation of solar activity associated with the processes of flaring energy release, which has a significant impact on an interplanetary environment and space weather. The payload onboard the second  nanosatellites is gamma radiation and charged particle detector (DeCoR) developed by Skobeltsyn Institute of Nuclear Physics, Lomonosov Moscow State University. The device objectives are to study fast variations of electron flows in the gaps between radiation belts, as well as to study the particle flows and gamma radiation dynamics in low orbits depending on geomagnetic conditions in the range of 0.1-2 MeV.[/caption] 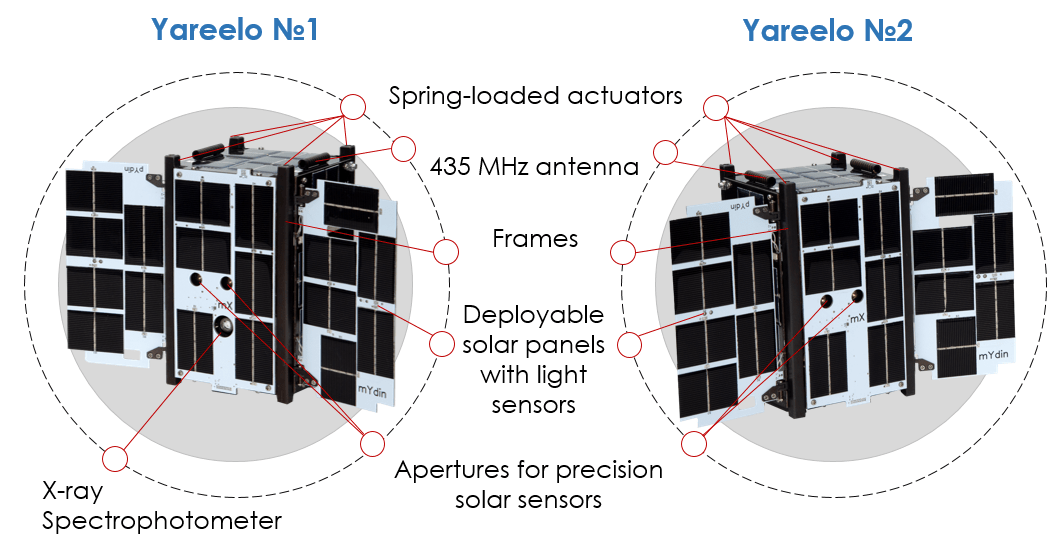 Experimental systems onboard the “Yarilo” nanosatellites :

The launch of the Yareelo-1 and Yareelo-2 nanosatellites was carried out on September 28 from the Plesetsk cosmodrome by the Roscosmos  as part of the Universat program .The Universat cluster of small spacecraft is the largest cluster of Russian CubeSat satellites launched in the interests of universities, research centers, enterprises of the Russian rocket and space industry.

You can learn more about the device’s systems in these video presentations (in Russian):